The Earth Conquerors are a Kaiju faction that was founded by SpaceGodzilla, the cloned half-brother of the King of the Monsters, Godzilla. The entire faction is made up of more malicious Kaiju as well as several new Kaiju that appeared after the battle against the Cryogs and the Trilopods. The faction was formed with the purpose of wiping out all of humanity, destroying their rival faction, the Earth Defenders, and claiming all of Terra as their own.

In the Prologue of Godzilla: Rulers of Earth Land, the Earth Conquerors had occupied an unnamed, malevolent-looking island located in the Pacific Ocean with jagged rocks and dark clouds looming over it, symbolizing the evil nature of the faction.

After they are transported into Earth Land, the Earth Conquerors stay on the airship of Grimoire Heart as part of their new alliance.

According to SpaceGodzilla, the Earth Conquerors were created specifically to combat the Earth Defenders and is made up a diverse selection of Kaiju, each with their own different special abilities and traits that make them powerful.

The Earth Conquerors were founded on the belief that Kaiju are more superior to humans and that they should be the true conquerors of Terra. They have two goals set in mind; one is the elimination of humanity, and the other to destroy their arch-enemies: the Earth Defenders.

Kaiju who had once been members of the Earth Conquerors but have since left to either go rogue or defect to another Faction. 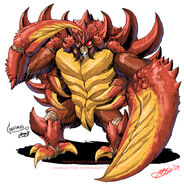 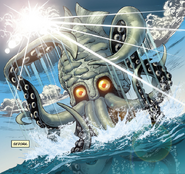 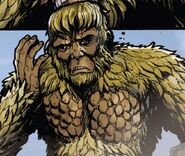 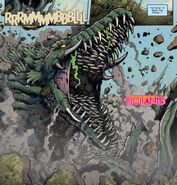